On Saturday, Parkwood has the pleasure of hosting a group of  Canadian women who travelled to London in 1953 for the coronation of Queen Elizabeth II. Known as the Weston Sisters, these women are gathering to celebrate the sixty fifth anniversary of the Queen's coronation.
Not to ignore the significance of their travelling from across Canada to meet in Oshawa and visit the Estate, we have developed a little surprise for them for their visit.

The royal family and the royal ties with Parkwood and the McLaughlin's is not lost on us.  The relationship is reflected in the telegrams, Christmas cards, the photos of royal visits to the Estate over the years housed in the archives.  Among the McLaughlin home movies, Parkwood has a nitrate cellulose reel ( and modern transfers) of the coronation itself, likely once set up with the family projector and screen and viewed in the Loggia during the family and friends movie nights.

Our surprise for the Weston sisters, is our next artefact.  Lovingly boxed and saved away in the closet spaces of Adelaide's Dressing Room is a bolt of Queensway, the Coronation silk, developed for Queen Elizabeth II by Robert Godden, Rector Royal College of  Art, London and woven by Warner and Sons Ltd., Braintree. Warner and Sons Ltd, were the purveyor of silks to the royals since Queen Victoria's reign, when they received the official Royal Warrant, until 1971 when their factories closed. Warner and Sons, Ltd. now tell their stories and preserve their pattern books through the Warner Textile Archive

To prepare for the June 2, 1953 Coronation date, the fabric was woven in December 1952, the design, blue with gold lurex thread. The patterns in the silk showcase the heraldic emblem of the Sovereign, the rose represents England; the thistle, Scotland; the shamrock, Ireland; and the leek, the Principality of Wales.

If you are on tour this weekend, you will have a chance to glimpse the Queensway bolt, in pristine condition, from being housed in a box, in a dark cupboard away from hands and light for the last sixty five years.

Tucked away beneath the cantilever staircase and trumped by that very staircase, along with the Aeolian organ console and the Haines mural of the Parkwood grounds, is a 300lb 1940 RCA Victor Instrument that operates as a radio; phonograph; recorder; and public address system.

Built in Montreal, this is one of those artefacts Parkwood has in the collection that I am always in awe of the amount of information we have that tells its history and beginnings. Most who follow this blog or have encountered me, know that I like to discuss the layers of information and history that Parkwood has in terms of our collection.  The RCA Victor is an excellent example of this, an item that draws information both from its presence in the Estate, but also the supporting information that lives in the Parkwood Archives.

I opened the unit this morning to take a look at it again, before I blogged about it.
Here is the first look, a record still in position as if it had just finished playing.  The record, Fritz Kreisler and the London Philharmonic, Concerto in E Minor
Link to hear 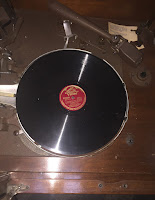 According to Wikipedia, "Friedrich "Fritz" Kreisler (February 2, 1875 – January 29, 1962) was an Austrian-born violinist and composer.[1] One of the most noted violin masters of his or any other day, and regarded as one of the greatest violin masters of all time, he was known for his sweet tone and expressive phrasing. Like many great violinists of his generation, he produced a characteristic sound which was immediately recognizable as his own." 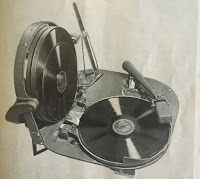 What is interesting about this piece is the claims in the sales manual, it was a phonograph and radio, but also a recorder and a public address system.  Among the literature that exists in the archives, are photos of the turntable systems and microphone, an artefact that Parkwood still has in the collection.
It makes me wonder if the address system was used during Sam and Adelaide's parties, perhaps their war bond drives 1939 through 1945?

Did Gracie Fields use the built in microphone to entertain the guests at the Chrysanthemum Tea bond drive when she was here?

The turntable shows that a collection of records could be stored, ready to play, without interruption as the musical entertainment of any Parkwood event. The control mechanism demonstrates how easy it was to turn

the dial to move from radio, to recorder, to turntable to broadcast.

Music was a significant attribute to the household; the Aeolian organ, the Duo-Case player mechanism for the organ, the Steinway, the daughters' instrument lessons, and impromptu performances, and the bands/orchestras hired to provide music for various occasions at the Estate, including Guy Lombardo.

However, it doesn't end there in terms of what is in the archives collection. Among the items that were saved, tucked away for safe keeping at some point among the household items, is a collection of the operating instructions booklet; a collection of needles, sharpeners for the record needles; and a homemade chart on stations and weather reporting broadcasting times. 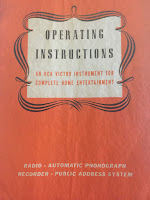 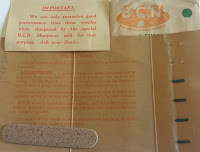 These pieces of material culture help us to further understand the family and the Estate, albeit, I have more questions, but we do get a glimpse into the daily lives of the family, and a further understanding of music in the home and an affinity for weather reports, in the days prior to the Weather Network.


Posted by Parkwood Estate at Friday, January 06, 2017 No comments:

Eighty years ago this week, Parkwood, as a family home and the workplace for forty servants was abuzz with activity and wonder around what King Edward VIII was going to do.  The abdication crisis fueled the imaginations, fears and thoughts of Parkwood, just like it did the world and this has been captured in the secretary's journals, as well as in Adelaide's scrapbooks.

Todays generation may be aware of the abdication crisis through pop culture references, recently The King's Speech and the Netflix  success, The Crown, however, the context around the atmosphere at Parkwood is fascinating and this is why I have chosen to examine it in this blog. 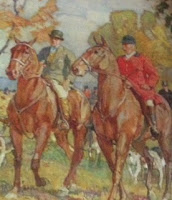 David, or Prince Edward, was a guest at the Estate during his visits to the Dominion. His car of preference was the McLaughlin-Buick, custom designed and built in Oshawa. Prince Edward, in green blazer with bowler, is even captured in the Billiard Room mural, north east corner, at the Toronto Hunt Club, with George Beardmore. I have always wondered why in a mural commissioned to showcase family hobbies, pursuits and delights, Edward and Beardmore are prevalently situated, and one can only assume a household affinity towards both must have existed when the mural was executed by Frederick Challener in 1924.

During our oral history collection several of the past serving staff have referenced this time frame within the mansion, and the tensions that existed.  At the time, a radio was situated in the servants' dining hall location, rear of the mansion off the main kitchen, and the staff would gather to listen to the reports out of London.  Household Secretary JJ English has captured the feelings in his notations within the daily journal, "everyone at high tension, rumours..."

And the abdication is broadcast worldwide :

Imagine the households and workplaces throughout the Empire coming to a standstill to listen to the broadcast as Edwards says farewell.

The frenzied days after the abdication and the romance of what has become acquainted with Edward's act of renouncing the throne, the fairytale of the 20th century, with the love letters, clothing and items of both Edward and Wallis Simpson selling for small fortunes, are imprinted in the newspapers, journals and collective memories of the era.  Even the McLaughlin-Buick custom made for Edward has been coined "the worlds most romantic car"
Romantic Car

In her scrapbooks, Adelaide has a collection of articles and papers that follow the legacy and life of Edward notably the abdication headlines, but also what is to occur next. 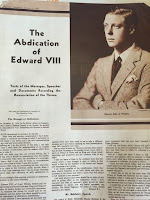 In January of 1937, Macleans Magazine publishes a series of articles analyzing the abdication and the players involved, from Baldwin to Churchill to Wallis Simpson to Westminster to the Act of Abdication, itself. 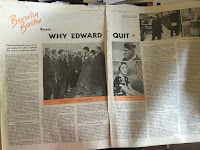 Finally, among the items in the scrapbook is a 1947 Time Magazine article written by Edward himself, discussing his 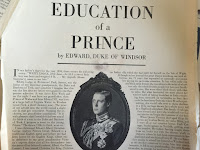 education.
It's a fitting piece for Adelaide's scrapbook, combining her love of the monarchy, but also education. It is interesting how she continued to follow Edward's life once he had left the throne.


In the following typed letter, an item I recently acquired from McLaughlin family members, there is a reference to the defunct monarchy of Edward VIII. I will elaborate on the further contents at another time, however, I enjoyed this line, as it summed up for me, the family feelings over the abdication

Posted by Parkwood Estate at Monday, December 05, 2016 No comments:

Parkwood Estate
Parkwood is one of Canada’s finest and last remaining grand estates, featuring architectural, landscape and interior designs of the 1920’s and 1930’s. Once home to auto baron R. Samuel McLaughlin (founder of General Motors of Canada), Parkwood is praised by Canada’s Historic Site and Monuments Board as “a rare surviving example of the type of estate developed in Canada during the inter-war years, and is rarer still by its essentially intact condition, furnished and run to illustrate as it was lived within.” Parkwood was the family home of the McLaughlins from 1917 until 1972. The majestic estate that was once a private enclave to be experienced by a select few is now a National Historic Site, open year-round to be enjoyed by all. The large property still retains its original essence as the private abode of a prominent Canadian family, reflecting not only the personal interests and tastes of its owner, but also five remarkable decades in history as Canada and the world embraced both the automobile and 20th century technology.